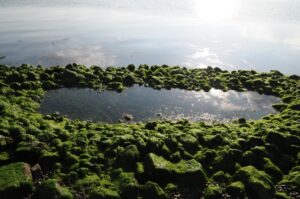 The additional cost of introducing water retaining pools, additional types of limestone and additional sorting in the berm is marginal in the total cost of dike upgrade. In the eco-engineering design, this berm is engineered to produce variable profiles (in slope, material and sorting) in perpendicular and alongshore directions. Monitoring has shown that water retaining pools with additional sorting of limestone increases the biodiversity dramatically in the intertidal zone. The pools function as sheltering habitat for many shrimp and smaller fish species. Algae productivity is increased in the pools. 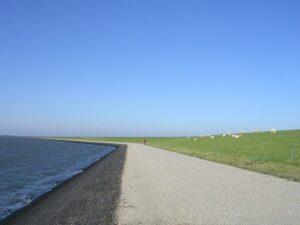 In a standard design, the required safety level is maintained by parts of dike construction situated above the average high water mark. Lower zones, such as the intertidal berm are not crucial to safety and allow degrees of freedom in the design process. In the traditional design this berm is engineered to produce monotonous profiles (in slope, material and sorting) in both perpendicular and alongshore directions.

Structural works like dikes are mostly designed purely from a safety point of view. Optimization for enhancing ecological functions is not often considered in the design phase. In Natura 2000 area Oosterschelde, the dike upgrades should result in zero net change of nature value of each dike section compared to the original situation. The objective of ecobasins is to contribute to the ecological value of a dike and create a net positive contribution to natural value of the dike section. Construction of Ecobasins along dikes will improve biodiversity and bio-productivity . Other objectives are to create educational opportunities and to raise awareness of designers, constructors, students and visitors.

In 2008 the Project Agency Zeeweringen (established by Rijkswaterstaat Zeeland and Waterschap Scheldestromen) started a pilot project in cooperation with Rijke Dijken (Rich Revetments, in Dutch) on the Oosterschelde dike of the Koude- and Kaarspolder, northwest of Yerseke. In 2010 a second project was implemented in a dike section along the Oosterschelde between Wemeldinge and Kattendijke.

Within the pilot project near Yerseke, tidal pools (so-called ecobasins) are applied in the “toe” of the dike, i.e. the fortified link between the dike slope and the foreshore. The dike toe traditionally consists of loose stones, protecting the dike foreshore against erosion. In the case of the Koude- and Kaarspolder, the dike toe was partly renewed, strengthened and maintained. As a pilot experiment, ecobasins were designed and constructed as part of the renewal of the dike toe. Along the 1 km dike 10 short pools (ecobasin type 1, 2m length) and 2 long pools (ecobasin type 2, 20m length) were created. The basins were made waterproof with a sheet of asphalt underneath a layer of lava stone, so that they would not empty during low tide. Within the basins various stone types and sortings provide fixation for algae and shelter for juvenile fish and macrofauna.

The second project consists of much larger basins (5mx150m). These basins have been constructed with deep and shallow parts, were waterproofed with asphalt and the bed substrate was topped off with a layer of small lava stones (60-150mm). At some locations heaps of larger limestone (60-300kg) were constructed in the pools.