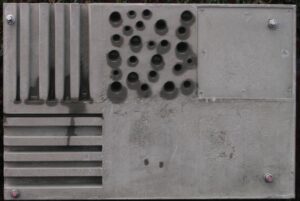 The breakwaters at the entrance of the North Sea Channel at IJmuiden (The Netherlands) protect the port against wave attack. The breakwaters consist of regularly placed 2 m x 2 m concrete blocks. The surface of the blocks, with cracks and spaces between these blocks are habitats for a diversity of marine flora and fauna like algae, insects, crabs and shellfish, fish and birds (including species on the red list). Because of this, it is important that during and after renovation of breakwaters, the affected hard substrate habitats is able to recover quickly. This can be stimulated by the use of special concrete blocks, which is investigated in this pilot study. Eco-concrete will stimulate re-growth and biodiversity in exposed environment.

In order to stimulate the growth of marine species on the breakwaters, the aim of this pilot study was to test slabs with various textures and geometric shapes attached to the concrete blocks for algal and macro-faunal colonization. Consequently, this will contribute to the requirement of maintaining feeding habitat area for a red listed bird species, which could be crucial for Natura 2000 legislation of a good ecological condition (EU Water Framework Directive).

Eco-concrete will stimulate the settlement of a diversity of marine flora and fauna like algae, insects, crabs and mussels. These species serve as food source for birds such as the Calidris maritima Purple Sandpiper. Besides, given their filter capacity, filter-feeders such as mussels are known to decrease the fine sediment concentrations in the water column and in this way increase the amount of light in the water column (e.g. Dolmer, 2000). Moreover, mussels are known to improve the water quality by retaining toxins (e.g. Strogyloudi et al. 2006).

The design and construction of eco-slabs was a co-production of Deltares eco-engineers with construction specialists of BAM DMC and engineers from the Ministry of Public Works – Rijkswaterstaat. In an interdisciplinary workshop session, possible structures were designed.