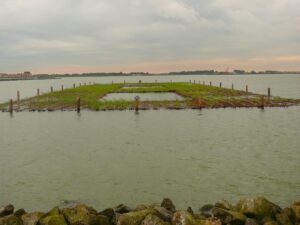 The innovative application of braided brushwood mattresses aims to create floating foundations for emergence of reed vegetation. The floating mattresses locally reduce currents and waves thereby decreasing hydraulic loads on the dikes and creating valuable habitats above and below water. More low-energy conditions stimulate settling of suspended solids and promote the stabilization of silty soils. Traditionally dikes in Dutch freshwater lakes directly border the water. However, historically this zone was used to be a gradual transition between land and water inhabiting freshwater marshes. To reduce wave impact on dikes, rows of poles can be placed in front of the dike, or dikes can be designed to withstand wave impacts themselves.

Along the coast of large Dutch freshwater lakes, dikes often border the water directly, with relatively steep slopes. Shallow zones and the gradual slope from land to water are lacking. Consequently, species that inhabit these zones are decreasing. In addition, constant lake-water levels cause erosion of shores. To dampen waves and recreate gradual land-water transitions brushwood mattresses were constructed in front of the dike. These mattresses might facilitate development of floating reed marsh in the shallow zone in front of a dike. This marsh reduces wave impact on the dike, enhances sedimentation and creates a clear shallow water zone with (submerged) vegetation. Thereby, the initial substrate of the mattress could be suitable for establishment of filter feeders, such as zebra mussels (Dreissena polymorpha) and for other species.