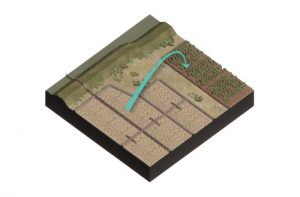 The Ems estuary has prolonged problems with water quality because of high concentration of suspended matter. Because light cannot penetrate the turbid water column, less photosynthesis takes place reducing the oxygen concentration thus degrading the ecosystem. The Kleirijperij is a pilot project along the Ems estuary with the aim to ripen clay originated from the turbid waters at the port of Delfzijl. The clay will be turned it into reusable material to strengthen the 1km long part of the ‘Brede Groene Dijk’. In short, this dike is distinctive by a gentle slope and grass cover. If the pilot is successful, the remaining 10km of dike will also be strengthened. In this manner, this project assists in reducing the excess of suspended matter but also generates a local building material to reduce construction costs with respect to traditional dike reinforcements.

Clay ripening has been done before, but what makes the Kleirijperij unique is the involvement of all the different partners. Governmental organizations, waterboards, engineering companies and knowledge institutes work together towards the common goal: producing clay that meets the requirements for dike construction within three year (starting in April 2018). This is done by depositing the sediment in 25 (15 at Delfzijl, 10 at the salt marshes) test cells varying in depth, see Figure 2. Different ripening strategies are tested (e.g. layer thickness, dry versus wet consolidation, seeding vegetation, applying mechanical force) and their effect on desalination and ripening is monitored over time (Sittoni, Van Eekelen, Van Der Goot, & Nieboer, 2019).

A comprehensive ripening project was harnessed in the 70’s and 80’s called Euroklei. Its aim was to evaluate different application possibilities for ripened dredged material. During this time regulations prohibited dredged material to be disposed at the Northsea because of ecological concerns. Besides, there was a need for clay to strengthen dikes. The base material for Euroklei came from the eastern part of the port of Rotterdam (Waal, Maas and Rijn port). The material was deposited on the Maasvlakte over the course of 2 years. Dewatering ditches and mechanically turning the sediment were used techniques to ripen the material. The ripened material was used to strengthen three test locations on dikes: 1) hulpkade Streefkerk 133m long, 2) Deltadijk Streefkerk 135m long, and 3) Proefvak Deltadijk Hoek van Holland 200m long. Also, traditional clay was used to make a good comparison with the ripened material (Gemeente Rotterdam, 1987).

The conclusions of this pilot shined light on dike performance influenced by the soil characteristics and therefore the degree of ripening. The main conclusions were that the material could be uses as core material and as cover material for the dike given that the NaCl concentration was below 4% in the porewater of the clay. Also, there was no difference in terms of erosion resistance compared to the traditional clay. Ruptures of the soil occurred at hulpkade Streefdijk because of shrinkage, but this can be attributed to a low degree of ripening (n>0.75), see Equation 1. Noteworthy is the slow growth of the grass cover at Hoek van Holland because of higher salinity values. The grass cover grew faster at hulpkade Streefdijk because of high amount of organic content and limestone.