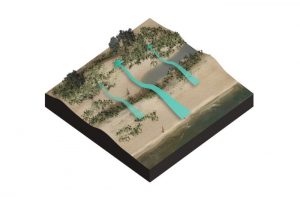 In short: the benefits of enhancing dune dynamics

Dynamics are necessary to create the right conditions for several biodiverse dune habitats to develop and sustain. Without the influx of sand, dominant fast-growing species such as shrubs will colonize the dunes and reduce the diversity in habitats and species. In addition, enhancing dune dynamics also increases the possibility that the dunes ‘grow’ with sea level rise with sand ending more land inward and higher up in the dune (Osswald et al., 2019). A summary of the boundary conditions and the benefits of enhancing dune dynamics are presented in Figure 1.

Coastal sand dunes are mostly located in coastal regions where sand prevails as the dominant sediment type and where the dominant wind direction is landward. The size and morphology of coastal dunes depends on the interaction between processes of sedimentation and erosion, vegetation, and the characteristics of the nearshore and beach environment (Sloss et al., 2012). Vegetation plays a key role in the development of coastal dunes; it traps sediment and as such helps to build up a dune system.

Zonation and succession in a coastal dune system

A coastal dune system can be divided in different zones that differ in (the dominance of) physical and ecological processes, resulting in different habitat types. These zones show an ecological succession, from embryo dunes on the high beach with pioneer species, via a mosaic of white dunes, dune meadows and dune slacks to shrublands and eventually forest land inward (Figure 3). Succession is the sequence of organisms that succeed after each other in an ecosystem until it reaches a climax community (Newman, 2020). A key feature of dune vegetation is the sequence of different vegetation communities or zones that occur with increasing distance landward. Each zone in the vegetation sequence has a different species composition that is related to the ability of the plant species to withstand environmental factors prevailing in that zone. The physical processes that determine where and in what form these habitats occur, are:

For vegetation to become established, pioneer species must cope with occasional storms and extremely stressful conditions (heat, salt spray, low nutrients and lack of fresh water). However after having been established, pioneer species can build up an embryo dune that can together grow into a foredune. This foredune reduces the stressful conditions for colonization in areas behind it, the secondary dune or hinterdune, by less stress-tolerant species.

Typical dune habitats include the beach, embryo dunes, foredune and older hinterdunes. In humid valleys between the dunes, dune slacks can occur. From the foredune towards the hinterland, biotic factors (vegetation) become increasingly important by trapping the sand and stabilizing the dunes (Olson 1958, Hesp 2002, Davidson-Arnott 2010). When the influence of disturbance (sand transport, grazing) is limited, succession leads to the establishment over time of grassland (grey dunes), shrubs, and eventually forest. High nutrient loadings (e.g. by atmospheric nitrogen deposition) will increase the succession rate and reduce biodiversity (Figure 3).

Habitats and vegetation types that depend on (some level) of dune dynamics are grey dunes (dune meadows) and dune slacks. The white dunes (front dune row with marram grass) also depend on dune dynamics, but white dunes are not threatened in existing dune systems because they are usually naturally dynamic. However, when a dune system has largely or entirely disappeared, restoring dune systems will start with restoring the white dunes. Only after some years, dune slacks and grey dune habitats can develop behind these restored dunes.

White dunes are dominated by marram grass and depend on the influx of sand. Marram grass is well adapted to these high deposition rates and will grow vertically with an extended root system as a response. In fact, the species is dependent on this influx of sand, and the species will be less vital and eventually disappear in the dune landscape landward, where the dune dynamics decline.

Dune slacks can be formed in two ways: When a row of embryonic dunes forms a new dune ridge on the beach. The isolated part of the (former) beach between the old foredune and the new dune ridge can develop into a dune slack. In the hinter dunes, a blowout can become so large and deep that it reaches the groundwater table, creating moist conditions for dune slack vegetation. Grey dunes, or dune meadows, are characterized by nutrient-poor soils with a high diversity of low moss and plant species. This vegetation type can only endure/persist when a sand is blown into the habitat to prevent nutrient levels to get too high. Additionally, grazing (by e.g. rabbits) is important to keep the vegetation short and to create small open spots of bare sand.

In different places around the world, coastal management traditionally focused on dune stabilization or on dunes replacing artificial hard constructions such as dykes to provide coastal safety. Stabilizing (fore)dunes is done through trapping sand by placing artificial structures (brushwood screens) and additional marram grass planting. This resulted in high and continuously vegetated foredunes, physically separating the beach (the main source of sediment input) from the hinterdunes. As a result, the natural dynamic processes of sediment transport, erosion and deposition have diminished, leading to a loss of biodiversity in these areas (e.g., grey dune and dune slack habitats being overgrown by scrubs) and a loss of rare plants and invertebrates that require open dynamic conditions (Schwarz et al, 2018).

Because the early-succession stages of dune habitats can only exist in dynamic environments, the stabilization of dunes has led to a decrease in biodiversity and a loss of valuable dune habitats such as dune slacks and grey dune grasslands. In some locations (especially near big cities), the dunes have been removed entirely and are replaced by dykes or other hard infrastructure. As a consequence, natural values and other functions of dune systems are lost.

Typical morphological examples of dune dynamics in coastal dune systems are: development of embryo dunes, a foredune with drifting sand and blowouts, notches and a parabolic dune system (Figure 4 & Table 1). Examples where dynamics of water play a role, are a washover and a tidal inlet. Each of these types has its own characteristics and not all types can be applied on every location. E.g. on locations with a small dune system and densely populated areas closely behind the dune system, a washover or tidal inlet is not a good strategy to opt for. Monitoring and maintenance of these dynamic dune elements is necessary and will be discussed in the ‘How to use’-section of this concept.