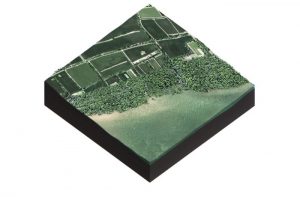 Nutrients: There is only an upper limit for the amount of nutrients in the sediment bed in mangrove forests. Too high nutrient load is considered to have a negative effect on mangrove resilience.

Ph and redox: Soil chemistry is important for mangroves as a low pH can be lethal to the trees. A neutral pH (7) is generally considered suitable for mangroves (Lee et al. 1996). The pH level can be an item when using material from elsewhere. Anoxic soils have a low redox potential. Typical values of the soil redox potential in the seaward zone are between -150 to -400 mV. Mangroves are well adapted to grow in anoxic soils, but prefer oxygenated soils. Oxygenating anoxic soils can alter the soil chemistry. Acidity can be caused, for instance, by disturbing anoxic soils which entails sulphide reactions. Bioturbation by animals facilitates oxygenation (Matthijs et al. 1999).

Mudflats/morphology: In order to dampen waves, mangrove forests require a minimum extent in the direction of wave propagation. Moreover, a wide mudflat in front of the forest will reduce wave energy before it reaches the mangrove seedlings. In addition, a mudflat provides space for a natural rejuvenation. The width of the mangrove forest needs to be at least 150 m for sufficient wave dampening and to allow for lateral change of the mangrove forest (Othman 1994).

In a natural accreting system, the bed profile is convex. There has to be sufficient accommodation space for the nutrient-bringing tide to move in and out through the mangroves. The forest should not be limited at the landward side by a dyke or or another immobile structure, as this would exclude this tidal water motion as well as landward migration in response to (relative) sea-level rise.

Sediment type: Nutrients and soil chemistry are dependent on the type of sediment, muddy soils are less oxygenated than sandy soils. Mangroves prefer fine muddy sediments, but can also grow in sand and on former coral reefs (Tomlinson 1986, FAO 2006).