A baseline model simulation was run with a standard DEB model for mussels, extended with the formulation of clearance rates (volume of water cleared of particles per unit time) and pseudofaeces production. The model was forced with environmental conditions (temperature, chlorophyll a and particulate inorganic matter) from model calculations for the North Sea (Schellekens, 2012) at location Schouwen 4. The model was run from May 1st, 2007 to December 31st, 2011. The temperature varied more or less sinusoidally between about 6˚C in winter and about 18˚C in summer. The Chl a concentration had a peak in early spring and a second peak in summer. Particulate inorganic matter is highest in winter due to the wind conditions. The resulting scaled functional response fluctuates between about 0.1 in winter and 0.8 in spring and summer.

The results of the DEB model

Mussel growth is mainly influenced by temperature and Chl a. Growth is highest during summer, when temperatures are highest. In winter the mussels do not grow in shell length and their weight even decreases, mainly due to the poor food conditions. Reserves are built-up during spring and summer and decrease during winter. Spawning may occur already in the second year, but is higher in subsequent years. The combined dynamics of length, reserves and gonads are reflected in the weight of the mussels. Highest clearance rates (about 3 l/hr) are achieved by the largest mussels and in winter. Although in general the activity of the mussels is low due to the low temperatures, the low concentrations of Chl a in winter lead to high clearance rates. Since the concentration of Particulate Inorganic Matter is high, the production of pseudofaeces is also high. Scholten and Smaal (1998) compute clearance rates for mussels as a function of seston concentrations in the Oosterschelde, Marennes-Oléron and Upper South Cove using the Emmy model. This model is based on detailed information of food uptake and food processing by mussels. In this study, clearance rates in the Oosterschelde seem to be highest in autumn, when the activity of the mussels is still high and Chla/sestion ratios are already low. 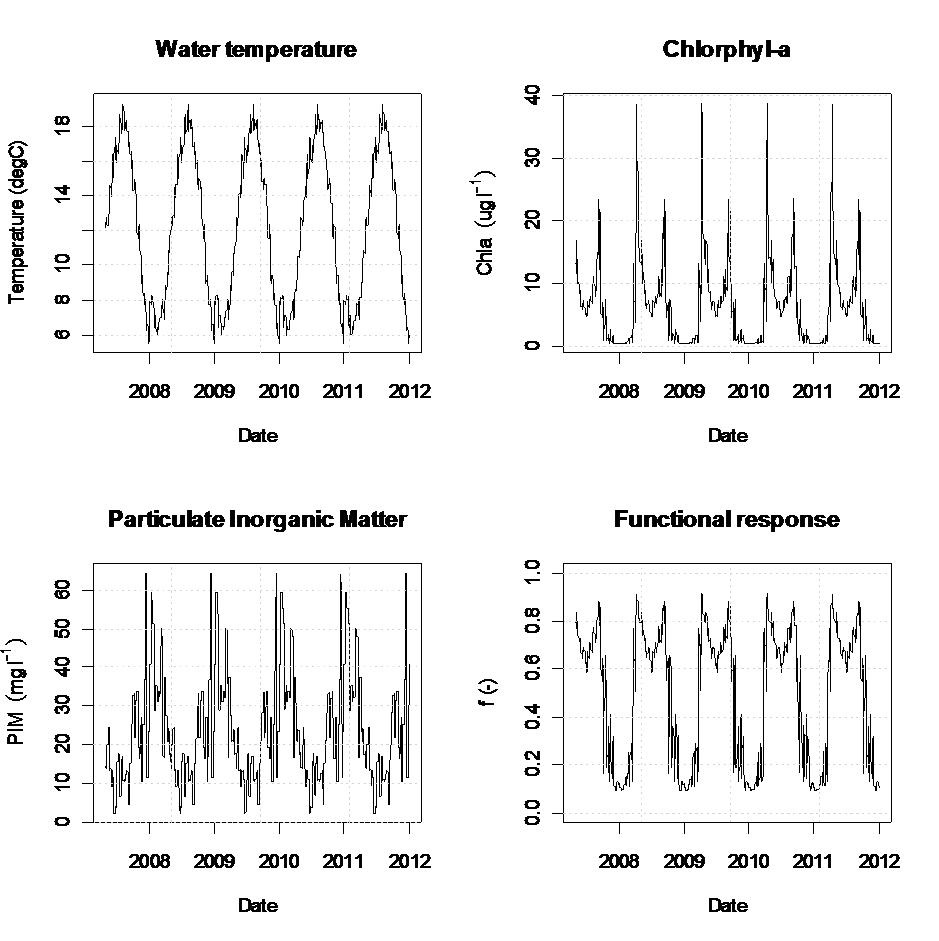 In order to study the effect of increased particulate inorganic matter on the growth and development of the mussels, three alternative model scenarios are run and compared to the baseline scenario. In all scenario’s the same amount of suspended matter is released, but the scenarios differ in the timing.

The other forcing functions, temperature and chl a were kept the same as in the baseline scenario. The resulting clearance rates and pseudofaeces production showed that the pulse inputs cause an increase in particulate inorganic matter, and a decrease of clearance rates. The decrease is more pronounced when the pulse input takes place in January. The pulse inputs have a positive effect on the pseudofaeces production. The continuous release of particulate inorganic matter and the pulse release in June have comparable effects on mussel growth, where the effect on weight is more pronounced than on length. The pulse release in January has almost no effect on mussel growth. 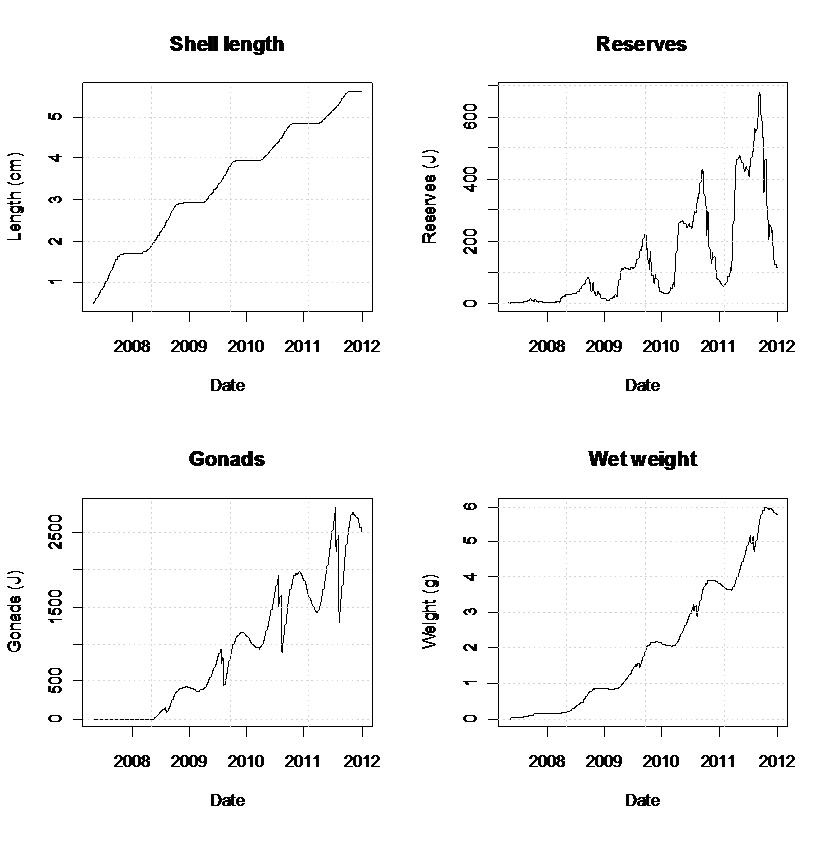 The impact of dredging activities on filterfeeding bivalves is studied by a combination of literature research and modeling. The increased suspended sediment concentration in the water decreases the efficiency of the filtration process, since part of the filtered material is rejected and excreted in the form of faeces and pseudofaeces. Laboratory studies show that the clearance rate by filterfeeding bivalves decreases with increasing particle concentration. Laboratory studies also show that the production of pseudofaeces increases with increased silt content. As a result of the decreased feeding efficiency, the growth and development of filterfeeding bivalves will be reduced and this might have a knock-on effect on fish and birds that depend on the bivalves as a food source. 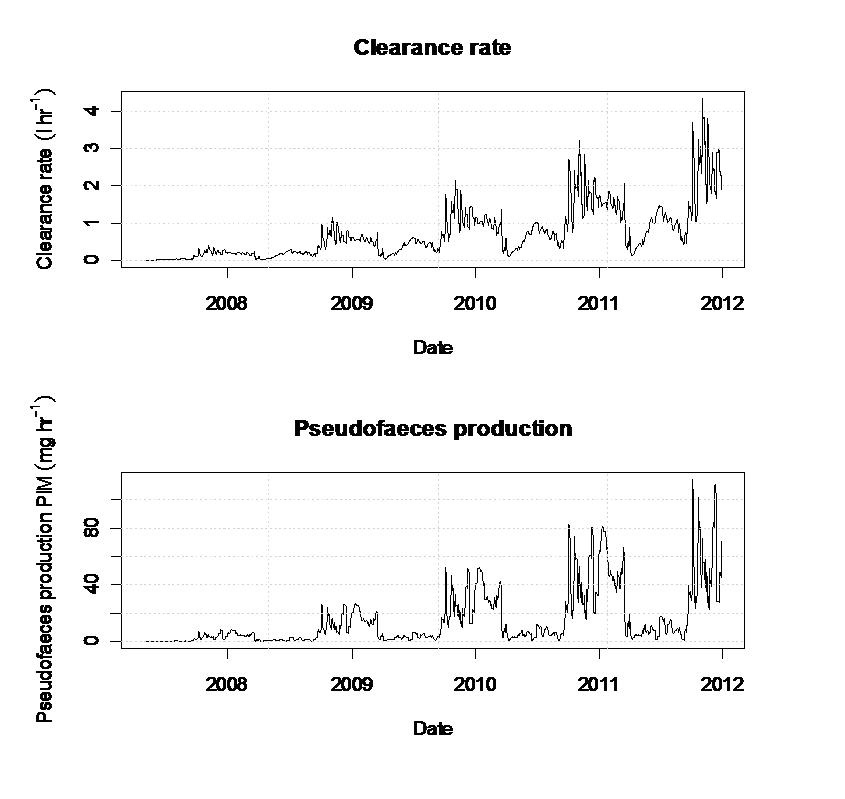