Ecological research on tidal sand bars and sand waves shows that there are differences in the benthic community composition present on the troughs, slopes and crests. Ecosystem-based landscaped bed forms of a natural scale may induce similar ecological differences. A higher overall biodiversity and higher heterogeneity may develop within sand extraction sites. 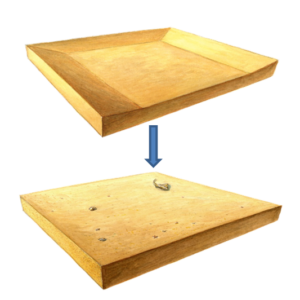 A traditional design of a sand extraction site is characterized by a flat seabed. After extraction, biodiversity and biomass will develop in a rather homogeneous pattern.

A pilot experiment is executed to test whether ecosystem-based landscaping enhances biodiversity after sand extraction activities. Present sand extraction policy aims at restoration of the original pre-dredging habitat. This is, however, a limiting approach. Flat seabeds tend to be ecologically less valuable than seabeds with meso-scale bed forms such as tidal ridges, shoreface connected ridges and sand waves. Such bed forms provide habitat to a larger range of species assemblages.

Effect of bed morphology on biodiversity and biomass

At a sand extraction site, seabed morphology and sediment composition is changed by removing a part of the seabed. Depending on the granted sand extraction license, this may lead to a significant increase of the water depth. Returning to the pre-dredging morphology may take decades or more.

In recent years, it has become increasingly clear that seabed heterogeneity (i.e. bed forms) constitutes habitats allowing for more biodiversity and more biomass. The pilot project described herein has applied this knowledge to a large marine sand extraction area off the coast of South Holland, the Netherlands. Two large-scale bed forms were left behind after extraction, to test whether these will accelerate ecological recovery and enhance biodiversity and biomass in the dredged area.

With the traditional state of development, allocation of permits and related monitoring for sand extraction sites tend to focus on the rate of habitat recovery in the areas. It is often unclear, however, what is meant by the term recovery. The basic goal is re-establishment of a  species assemblage like the one existing before dredging. This can only be attained if the original habitat, especially bed topography and sediment composition, are restored (Boyd et al. 2003). This is more likely to occur in case of shallow (2m) extractions, which give rise to limited geomorphological changes. Yet natural fluctuations may lead to the establishment of a community that differs from the original one (Van Dalfsen and Essink 2001).

If the environmental conditions after dredging have changed significantly, a different stable state may develop with a different species assemblage. Seiderer and Newell (1999) suggest that recovery can be interpreted as the establishment of sufficient species diversity following cessation of dredging, which would allow the biological resources to progress towards diverse equilibrium assemblages. It is therefore advisable to use ‘development of habitats‘ instead of ‘restoration of habitats’. This allows the creation of (new) habitats that are tailored to the new circumstances and thus have a much higher chance of reaching a stable ecological state.

The creation of bed forms and/or combinations of sediment characteristics yielding geomorphological gradients in a sand extraction site will enhance the conditions necessary for habitat diversity. In turn, habitat diversity may result in high biodiversity as a variety of species will be able to settle within the area.