Functional responses of filter-feeding bivalves to variations in seston have been discussed by numerous authors and implemented into physiological models. Some of these models are based on the DEB theory, and this will be discussed further.

The Dynamic Energy Budget (DEB) model has been developed by Kooijman 30 years ago (Kooijman 1986; Kooijman 2000; Kooijman 2010). The DEB model describes the energy flow through an organism as a function of its size, its development stage and environmental conditions. An individual organism state is represented by three state variables: structural volume (V, cm3), reserves (E, Joule) and reproduction (R, Joule). The organism acquires energy from food by assimilation. The energy that is not assimilated by the organism is released as faeces. The assimilated energy is first stored into reserves (blood, glycogen). From the reserves, the energy is mobilized into growth, development and maintenance. A fixed fraction (κ) of the energy flow from the reserves is used for growth and somatic maintenance, but the priority is given to the maintenance. The rest of the energy flow from the reserves (1-κ) is spent on maturity maintenance and reproduction (gamete production and spawning). Juveniles spend this energy to maturation, while adults use it for gamete production and spawning. A key process is the assimilation rate of the food. In DEB, this is generally described by a Holling type II functional response. The scaled functional response (f) is the ratio between food uptake rate (in Joules) and the maximum food uptake rate (in Joules) and varies between 0 (no food uptake) and 1 (maximum food uptake rate). At a food concentration X = Xk, the functional response equals 0.5. 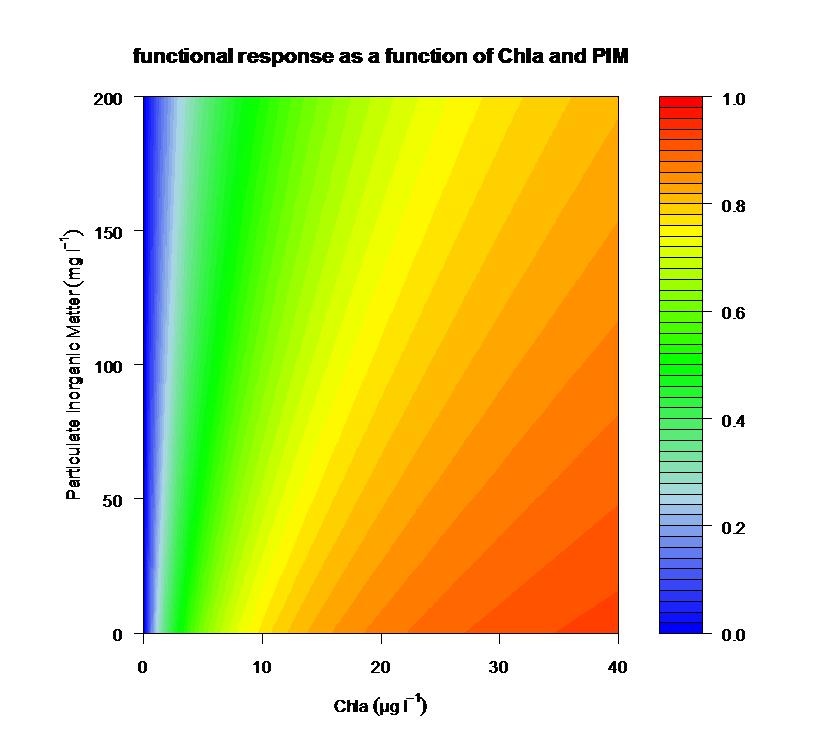 Suspension feeding bivalves obtain their energy by pumping water with suspended organic particles over their gills. Edible particles are selected using palps and the non-edible fraction of particles is released in the form of pseudofaeces. The energy that is not assimilated by the bivalve is released via faeces. In DEB models, the effect of inorganic particles can be incorporated in the formulation of a scaled functional response (Kooijman 2006; Wijsman 2011; Wijsman and Smaal 2011).

The scaled functional response increases with food (expressed as Chl a concentration) and decreases with the particulate inorganic matter concentration. The model is in accordance with the Synthesizing Units concept introduced in the DEB theory by Kooijman. This model assumes that handling inorganic particles costs time for the filtering apparatus and that this goes at the expense of time available for food particle handling. With this approach it is possible to model the effect of inorganic particles on the growth of shellfish, although it does not describe the process of filtration and the production of pseudofaeces and faeces explicitly.

Saraiva et al. (2011) have developed a mechanistic approach to model filtration by bivalves and their production of faeces and pseudofaeces based on the Synthesizing Units concept. The model allows for various fractions of the filtered material (e.g. silt, algae, zooplankton, detritus). In this example we only use silt (X0) and algae (X1).

Feeding is split into separate processes: