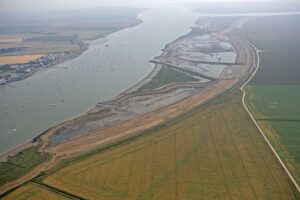 An EDD approach to wetland restoration implies that both location and design are highly influenced by environmental factors, but also include an integral approach. In case of Wallasea the location is carefully chosen to have the largest additional environmental value without destroying any of the existing environment. The wetlands are not only aimed to compensate for nature losses, but also to (indirectly) provide flood protection and to serve recreational purposes. 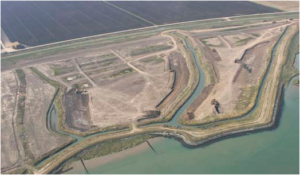 A traditional approach to compensating measures such as wetland restoration would spend as little effort as possible to just meet the requirements. Most probably, the process would be dictated by the authorities.
In terms of flood protection a traditional design would be that the existing dikes would further be raised to cope with progressing sea level rise. Increasing river discharges would further enhance the design water levels in the estuary, thus necessitating further dike raising.

On Wallasea Island, large wetlands are reconstructed that simultaneously form a nature area; a flood storage facility and a recreational area.

To compensate wetlands and (bird) habitat losses caused by harbour development along the British coast, suitable locations are to be reopened to the sea.This ‘Managed Realignment’ is realized here by bank realignment, i.e. removing large parts of the existing embankment and building a new one further inland. The primary purpose in this case is to create new wetlands that will function as bird and wildlife habitat. A beneficial side effect is creating a sustainable flood corridor reducing flood and surge levels. A suitable location no too far from the lost wetlands was looked for, a location where the realignment would have a positive effect on the estuary and the existing wildlife.

The ideal location was found on the island of Wallasea. On the northern shore of the island 115 hectares of wetland was created forming the largest man-made wetland in Europe. The wetlands are supposed to provide for a new bird and wildlife habitat, add to flood protection, mitigate climate change and create recreational opportunities. Creating a buffer zone by laying back the embankment is a good solution to the re-naturalization of low-value land.

The solution at Wallasea constitutes an integral approach of PPP. The environmental factor to create (bird) habitat is the primary goal, but socio-economic goals such as flood protection and recreation are also included.

One of the governance issues was the large number of permits needed. This process was accelerated by early consultation of the public, as public perception was recognized to be of importance. Furthermore, early involvement of all stakeholders has been an essential part of the project. As such, national and local authorities were included in the planning and design phase.