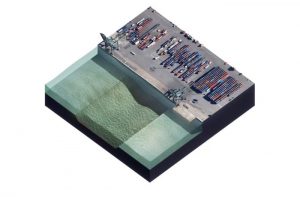 The concept focuses on enhancing sedimentation in environments with too high turbidity levels. As a result, the turbidity in the water column is reduced, which will improve the clarity of the water which affects light penetration, photosynthesis and visibility for predators and prey. Turbidity in the water column is primarily influenced by suspended sediments and organic matter. Sediment can be separated into two groups: non-cohesive (sand, gravel) and cohesive sediments (clay and silt). These categories exist because of their different sediment properties and behavior. Being aware of the difference in these properties is essential, as Building with Nature design and implementation might require a different approach. Both cohesive and non-cohesive sediments can be found in suspension, however fine sediments (cohesive sediments) are mostly transported in suspension and coarse sediment (non-cohesive sediments) are transported in a thin layer close to the bed in the abovementioned low-energetic conditions (bed load transport). Since coarse material hardly increases turbidity, hereafter the focus is on fine sediments only.

The success rate of this concept is determined by the balance of deposition (sink) versus erosion (source). Once the deposition processes cause more sediment to settle than the erosion is able to entrain to the water column, the net sediment concentration in the water column will decline. The sedimentation basin is an extra contribution on the deposition side of the balance. However, the spatial and time scale of the balance and the envisaged purpose of the sedimentation basin, logically determine whether the sedimentation basins can be considered to be effective. For instance, local turbidity reduction requires different basin characteristics than improving the environmental conditions in a complete lake. Therefore, the (1) expected sedimentation rate in the basin and the influence of the basin on the sedimentation rate (2) in the local area and (3) in the surrounding area and beyond (system scale), should be clearly distinguished. The relevant balance processes are explained in more detail below.

The trapping efficiency $TE$ is defined as :

It can be deduced that if a basin traps significant amounts of sediments (high numerator), while the flux towards the basin is also high (denominator), does not necessarily result in a large efficiency. The effect of this hydrodynamic forcing and the scale of the balance are discussed in this section.

Hydrodynamics
Currents influence settling of sediments in the sedimentation basin, but the geometry and orientation of the basin itself influences the local current patterns too. A parallel situated channel to the local current may increase velocities in the trench due to the decrease of bottom friction (van Rijn, 1986) and hence ‘attract’ the current towards the channel. In case of a perpendicular situated channel, the velocities in the deeper zone are reduced due to the increase water depth.

Waves influence the sediment transport in the basin due to stirring action on the sediment particles. This effect becomes larger when depth decreases, because wave (breaking) motion feels the bottom more. In case of parallel incoming waves with respect to the parallel channel axis, the waves tend to refract (turn towards trench edges), resulting in reduced wave action at the end of the channel. In the perpendicular situation the waves are reduced due to the reduced depth. The combined effect of currents and waves is illustrated in the figure below for different approach angles (α0), ratio basin over water depth (d/h0), ratio channel width over water depth (B/h0) and ratio fall velocity over bed shear velocity (ws/u*,0)

Scale of the sediment balance
For the reduction of turbidity, a sedimentation basin becomes efficient if it reduces additional turbidity with respect to the natural rates (Van Rijn, 2019). If a sedimentation basin has a large trapping efficiency, it means the local impact is also large. This will likely improve local habitat development, but does not necessarily mean that the impact at system scale is also large. In coastal regions with strong tidal forcing (order 1m/s), the advective mud (or horizontal sediment) fluxes are much higher than in wind dominated lakes (order 0.1m/s Markermeer) and therefore need to trap much sediment in order to have a significant effect on system scale.

Large scale application of sedimentation basins in coastal zones and especially in estuaries should be studied with great care. There is often a scale difference between local sedimentation pits and large navigation channel deepening. However, in case of upscaling the size of sedimentation pits one should be aware that deepening of estuarine channels often leads to tidal amplification and increase sediment import (Van Maren et al., 2015).  Construction of large deepened areas in estuaries could cause regime shifts that result in higher turbidity levels than prior-deepening.

Fine sediment (mud) consists of silt (between 63 µm and 2 µm) and clay (smaller than 2 µm). For sufficiently large clay content mud has cohesive properties. It is important to acknowledge that sediments in the water column are not necessarily solely cohesive. Sand-mud mixed suspensions occur as well, having different flocculation dynamics (Manning et al., 2013). Mud mixtures have a large water content (typically 80-95%) and a low permeability that influence bearing capacity and consolidation. These processes are, in addition to settling and sediment-induced density currents, explained in more detail in this section.

Settling
The (constant) settling velocity is well described by the density and the grain size. On the other hand, fine sediments settle while aggregation of flocs continues. Flocculation is caused by charging differences. As a result, clay particles can aggregate and form flocs of various sizes and shapes. Flocculation is a complex and dynamic process that is depending on many variables (e.g. turbulent shear stress, suspended matter concentration, salinity, organic composition) (Krone 1962, Winterwerp 1998). The heterogeneity of mud mixtures influences their dynamics.

Flocculation results in an increasing settling velocity while the aggregates are settling. The flocculation process is enhanced by a higher suspended sediment concentration. However, the settling velocity decreases at some point due to hindered settling (Dankers & Winterwerp, 2007). At this point the aggregates are too close to each other to fall without hinderance. The end of hindered settling phase is characterized by the gelling concentration at which a space filling network (“skeleton”) develops, which means that all flocs/particles are considered in contact with each other leaving no possibility for further settling. In other words, the gelling concentrations is defined as the concentration at which the bed begins to exist, characterized by the transition from hindered settling to the first phase of consolidation (Meshkati Shamirzadi, Wichman, & Hansen, 2018). During the consolidation phase the water content slowly drops as the porosity decreases by the overburden pressure exerted by the weight of the overlying sediment. More information on consolidation can be found below.

Sediment-induced density currents
At sufficiently high suspended sediment concentrations, its influence on water density may exceed that of salinity and temperature gradients. Turbulence may be damped and settling enhanced. In such ‘saturated’ conditions, near-bed fluid mud layers (typically 10  – 300 kg of dry matter per unit of volume in m3) may be formed which might strongly contribute to fine sediment transport. Fluid mud is defined as a high-concentration suspension of fines in which settling is substantially hindered, but the gelling concentration is not (yet) reached (Van Rijn, 2016; McAnally et al., 2007). The formation of fluid mud is enhanced by a high percentage of clay (< 4 µm) and high percentage organic matter. In lake environments where high organic matter percentages could hinder dewatering, fluid mud layers can maintain. In addition, the type of material influences the bulking the material, implying that clay (e.g. montmorrolite) is able to retain water. This results in significant infill of the basin, but in essence contains limited solid matter. In general, fluid mud formation takes place once the influx fine sediment near-bed is larger than the dewatering rate of the near-bed suspension.

Flow of fluid mud can add significantly to the infilling rate of sedimentation basins, as the fluid mud can flow down slope into the basins. This motion is driven by a density current (action of gravity due to an imbalance in density). According to model calculations by Vijverberg (2008) the density current contributed to maximum 20% of the deposition in the silt trap of the Marker Lake. The density current increases the deposition of coarse material, but has less effect on the fine fraction (it settles slower). The contribution of density current decreases if the pit or trench is smaller. For a 200m wide deepening in the Markermeer Lake, this contribution was only 7cm per year  (Boderie, van der Wal, van Kessel, & Genseberger, 2010).

Consolidation
Consolidation is the process of floc compaction under the influence of gravity with a simultaneous expulsion of pore water (Van Rijn, 2005) and takes place in or near the bed. Since consolidation is in fact an increase of friction against erosive forces, it is considered to contribute to the sink (or deposition) part of the balance. This process takes place in both the sedimentation basin as its surroundings. Consolidation improves the capacity of the basin. Additionally, it improves efficiency of maintenance dredging since the particles are packed closer together, and hence more ‘dry content’ per cycle is transported. In addition, the density of the consolidated material is important to know in order to calculate remaining settlement, in case the mud is used for wetland construction.

Consolidation increases the density and strength of the bed, meaning that it is less easy for waves and currents to erode. The strength or critical bed shear stress depends on the bed material (mineral composition, organic content), salinity, bed structure etc.

More information on this process can be found in clay ripening and consolidation, in which the consolidation process plays a major role in the beneficial use of the sediment.

Erosion
The bed shear stress is the parameter that is used to characterize the erosive forces. The bed shear stress can originate from (tidal) flow and/or wave stresses (Soulsby et al., 1993a).  Resistance to erosion of the mud bed depends on various factors, i.e. sediment composition, biological factors (plant roots) and the strength of the bed and its layers. The state of the bed can range from a high concentration suspension towards solid well consolidated bed. Particles in the first state are more easily loosened from the bed than particles in the latter state. Three main modes of erosion can be distinguished: 1) floc erosion (re-entrainment of near bed suspension), 2) surface erosion (layers of flocs are eroded, due to negative pore water pressure gradients that initiate inflow of water into the bed), 3) mass erosion (erosion of lumps of mud due to undrained bed strength exceedance) (Mehta et al., 1989; Winterwerp & Van Kesteren, 2004). Pardo (2013) did research on the effect of bioturbation by meiofauna (small organisms) on the erodibility of sediment. Bioturbation is the reworking of soils and sediments by these organisms. This process appeared to be crucial in the increase of the erodibility of soft layers in the Marker Wadden (see section). The ability of oxygen to penetrate the layers (by hydrodynamic stirring of the soil) is an important feature for the meiofauna to be activated.

Re-suspension of sediment
After sediments have settled in the sedimentation basin, it should remain there. Regarding wave forcing, the shallowness of muddy lakes in combination with large effective fetches and high wind speeds, might result in re-suspension of the fine sediments. In coastal zones this can be caused by the tidal currents and waves as well. Sediment resuspension rates for lake Markermeer reached 1kg/m2/day during storm conditions, indicating a strong relationship between re-suspension and near-bed-currents (10cm/s). A potential solution would be to reduce fetch lengths, e.g. by creating artificial wetlands (Kelderman et al., 2012). Also aquatic plants (e.g. macrophytes) in shallow lakes can limit re-suspension by reducing wave and current action on the bottom. More information on causes and solutions for re-suspension can be found here.