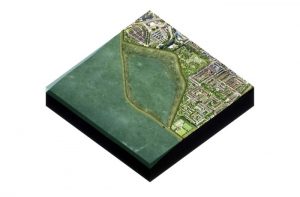 The principle of an inland buffer zone is already being practiced at two locations.

In 2010 Rijkswaterstaat and Deltares joined forces with the Province of Noord-Holland, the regional waterboard Hoogheemraadschap Hollands Noorderkwartier, and the Government Service for Land and Water Management (DLG) to develop an unique project: pilot Koopmanspolder. Originally, the Province aimed at a wet nature development project, but Rijkswaterstaat and Deltares convinced the other parties, including Staatsbosbeheer and municipality Medemblik, to include new elements allowing innovation on water management. Koopmanspolder is located near the villages Andijk and Wervershoof along the border of Lake IJsselmeer.

The pilot includes an inlet so that lake water can enter the polder, which is situated a bit lower than the lake. Water flows through a long spirally shaped ditch inside the polder with gentle slopes and is gathered into a small pond from which it can be pumped back into the lake.

The pumping facility will be equipped with a fish-friendly axial pump and driven by a wind mill. After a year, to allow the growth of riparian vegetation on the gentle slopes of the ditches, a field test of several years will start in which water levels inside the polder will be varied considerably simulating periods with floods and droughts. Monitoring of water and ecology will take place during the field test. Due to the design, the polder will function as a helophyte filter improving the water quality. In addition, fish can encounter better conditions for spawning than presently available in lake IJsselmeer. Besides, the polder can function as a climate buffer, providing a place to store water when there is too much, and withdrawal of water when there is too little.

The polder is situated along the Westfriese Omring dike, a popular route for recreational biking. The public can enter the center of the pond by a special facility and experience the benefits of good water quality, and enjoy nature in a newly created habitat.

All consortium partners are enthusiastic about this living laboratory because it combines knowledge from all partners and allows for learning together. In 2011 the design and the cooperative way of working resulted in winning the first price of the “Water meets Water” innovation contest. This procedure of “Learning by doing” is especially interesting because it allows us to quantify more precisely the ecosystem services of such a newly designed polder area. The project started in 2012.

It aims at creating a zone of high quality wetlands around Lake IJsselmeer where ecosystem services are optimized for different land use functions. It is based on the idea that more space for water is needed in a world with a changing climate, and that water can create new opportunities for economy and quality of life in deltas like the Netherlands. From 2014 up to 2016 field tests were executed to analyse the impact of different water level regimes on water quality, water quantity, flora and fauna. In 2014 the impact of a ‘natural water regime’ was tested with high water levels during the winter and spring period and a natural draw down of water levels during the growing season as a function of evapotranspiration. In 2015 a drought situation was simulated with exceptionally low water levels and in 2016 a flood event with exceptionally high water levels. The results show that the system can handle water level fluctuations of up to 2 m, water storage did not lead to ground water problems in the hinterland, and the water quality is high and supports fish and waterfowl.

More information can be found below:

A second pilot for the inland shore concept is the Wieringermeerpolder. This is a deep polder area in the north of the Netherlands which receives a high salt load through upward seepage. It borders Lake IJsselmeer and lies 4 meter below surface level. The polder is mostly mono-functional focussed on agriculture. Along the dike inland shores plans are developed for new business models focussing on water storage in combination with food production (floating cultivation beds, aquacultures, aquaponic systems) and recreational activities (e.g. fishing). In 2016 the pilot Wieringermeerpolder won the Water Innovation prize in the category “Sufficient water”. The focus of the pilot Wieringermeerpolder is on economic benefits of an inland shore.

In the figures below two impressions of how this water-production landscape could look like: