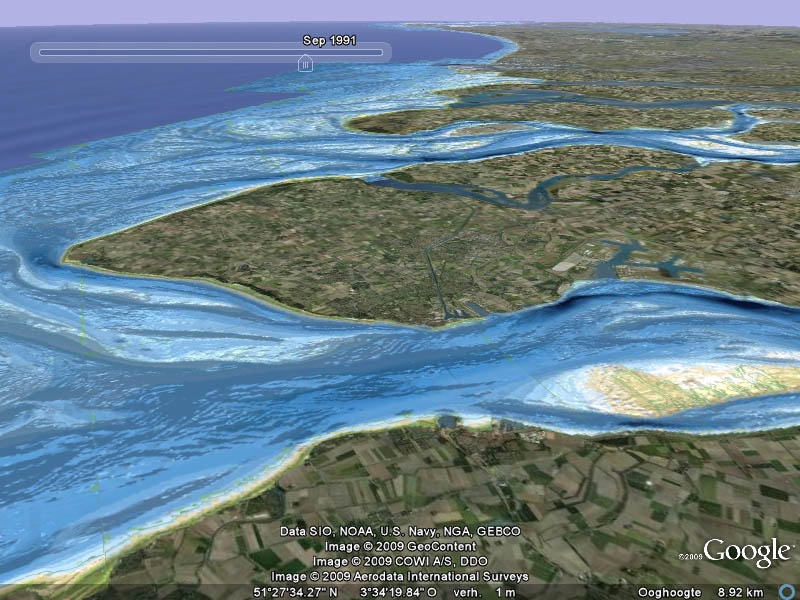 Understanding the morphological processes in the estuary is of crucial importance to better comprehend and predict the effects of environmental change and human activities. For instance, what is the influence on the processes when barriers (partial enclosure of semi-closure with a movable barrier) are constructed in a tidal basin or estuary. These works have important effects on the morphological and ecological development. Not only of the basins themselves, but also the adjacent coast and tidal basins. On a smaller scale they have influenced the development of channels, intertidal flats, saltmarshes and other morphological elements. Especially the effects on the intertidal flats have had significant ecological effects.

Understanding of these processes will help us safeguarding accessibility, naturalness, productivity and safety of the estuary for the future. Moreover, these enables application of the knowledge and experience gathered to estuaries elsewhere in the world.

On this page the influences on the Eastern Scheldt as an example are described. Based on the historical development combined with specific information of the tidal inlet, ebb-tidal delta, channel-shoal interaction, sediment exchange and the lessons learnt.

The Rhine-Meuse-Scheldt delta, also called the south-western delta of the Netherlands, is shown in the figure. Since in the nineteen sixties the Deltaworks started, in order to guarantee flood safety in this area (which was hit hard by the 1953 flood), this delta has undergone major changes. Dams and barriers have been built, on the coast to separate the tidal basins from the sea and further inland to separate saline from fresh water and to create a safe fairway between the harbours of Rotterdam and Antwerp.

The Eastern Scheldt, which is still open, but protected from storm surges by a movable barrier. With its relatively large intertidal area rich of food the Eastern Scheldt plays a crucial role as a stop-over in the East-Atlantic Flyway, which is used by some by 90 million migratory birds each year. The Eastern Scheldt is protected by the Natura2000 nature conservancy law. The construction of the storm surge barrier and the inner dams, however, have led to a decrease in tidal amplitudes, tidal volumes, and average flow velocities. This means that the channels suddenly had to convey a smaller volume of water each ebb and flood tide and were too large for that purpose. It also means that the tidal currents building up the flats were no longer in balance with the wave action eroding them. Moreover, there is hardly any sediment exchange through the barrier. As a result, the sediment inside the basin is redistributed, with the channels filling up and the ecologically important tidal flats eroding.

Also the Western Scheldt, which is still completely open, plays an important role in The Netherlands. Firstly, the estuary gives access to the ports of Antwerp, Flushing and Terneuzen and is therefore vital to shipping. Secondly, the Dutch part of the estuary is of great ecological importance due to the presence of its flats, saltmarshes and dynamic channel system. And thirdly, since the Western Scheldt is an open estuary, safety against flooding is an important aspect in the management of the estuary. Furthermore, comparison of the Western and the Eastern Scheldt, with their vastly different morphological developments over the last few decades, will help understanding the underlying mechanisms.