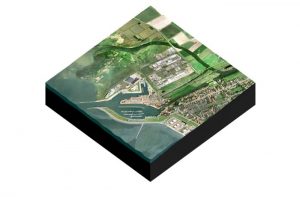 Restoration of estuarine ecosystems is possible through four Building with Nature concepts: creating tidal parks, restoring tidal dynamics, restoring salinity gradients and restoring connections. These concepts are based on the same natural processes, but their geographic context differs . Here, we focus on the distinctions between the concepts. For the optimal restoration of estuarine ecosystems, all concepts should be applied and combined.

A tidal park is a relatively small nature area within estuaries. The concept can also be applied in delta-cities. During centuries of urban development, many of these cities have removed sloped and soft river banks, making them unsuitable for many species. With the implementation of tidal parks, the local ecology is restored, with additional benefits for residents.

The parks should be positioned around the intertidal zone and are composed of natural features. They have a gradual transition between land and water enabling the water to flow into the park when the tide rises. These shoreline edges and river inlets trap sediment and allow for saltwater and wetland plants to take root, enhancing the natural ecology and creating new habitat opportunities. Tidal parks, with their gentle, sloping shorelines, have the additional benefit of supporting visually diverse, interesting landscapes where tidal fluctuations can become perceptible in an urban setting. The underwater vegetation plays a key role in the reproductive stage of fish. It is used as substrate for fish eggs and provides shelter during mating and early life stages.

Restoring tidal dynamics aims at the (re)-introduction of tides in closed of parts of the (former) estuary. Tidal flows will bring back dynamics and shape the intertidal zone, creating channels and creeks. Removing or opening water control devices to restore connections between water bodies can enhance the function of the overall system, bringing oxygen-rich water into previously stagnant locations. Tidal flows can contribute to enhanced nutrient circulation, and with it, habitat growth and regeneration. Reconnected waterways can enable tidal dynamics at multiple scales, from localized changes to large scale coastal watershed dynamics. Over time, small creeks can form when tidal dynamics are introduced, resulting in a more diverse environment. These variations create niches for different organisms, resulting in enhanced biodiversity and will also attract other animals such as birds.

Estuarine environments naturally contain flows, wherein freshwater flows out from rivers on top of saltwater flowing in from the sea, and the mixing of waters occurs gradually. In many modified environments, these gradients have been manipulated with locks or pumps, eliminating the transitional zone. Restoring the gradient contributes to enhanced natural diversity through more diverse habitat conditions.

In natural systems, elevated salinity levels of rivers can be observed deep land inwards. The concept of restoring salinity gradients aims to restore the salinity gradient over this large part of the river. As a smooth, elongated salinity gradient is restored, a diversity of species can be found along this gradient. To be able to achieve this, the natural flow of the tides should not be disturbed.

While this concept aims to restore the salinity gradient, it does not guarantee the migration possibility for larger organisms (such as fish). For this, the waterways should be connected in such a way that they facilitate migration .

Restoring connections aims to restore the free movement of aquatic and marine species, from the ocean over the course of the entire river. This concept is similar to restoring salinity gradients but demands a few specific design considerations. Physical barriers, like locks, may be opened from time to time, to allow fish to move. However, high currents at these openings, may the movement. Additionally, timing is important: is the lock open upon the arrival of fish? To overcome these factors, a permanently open migration route with low current can be designed. A fish migration river provides such a route. These pathways are placed alongside a lock or dike, to allow fish to move. These types of structures can be implemented in all types of rivers or streams, although they require a relatively large space.

One of the challenges in restoring connections is often that a river has multiple barriers, over many jurisdictions. Restoring a single connections does not solve the entire problem. While this makes implementing a migration river less attractive, it is important to realize that all restored connections add the total ecological resilience of the system. Legislative enforcement can also help in achieving a restoration of connections over the entire river (Enabler 4).

The concept of restoring connections is not only applicable to estuarine systems, but also to terrestrial systems. Creating blue-green networks in urban areas encourages plant propagation and supports animal communities. Building with Nature strengthens connectivity between upland areas and riverfronts, shore to shore, and along river corridors through connected and continuous shoreline habitats. The main challenges lie in removing barriers, which often demands innovative thinking. Green roofs and walls can allow for the migrations of species within a city. This can allow for the reconnection of city parks, creating in effect a much larger ecosystem.