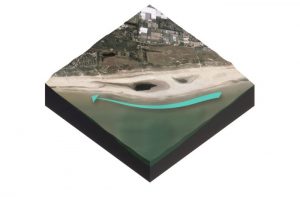 Sand nourishment in the form of feeder beaches has been applied along Dutch coastlines for several decades. It is not surprising therefore, that there are a large number of example projects to be mentioned here.

The table below summarises the characteristics of several cases. The following cases are eloborated more in depth below:

A surplus of sand (about 21 million m³) is put into the natural system and will  be re-distributed alongshore and into the dunes, through the continuous natural action of waves, tides and wind. In this way mega-nourishments gradually induce dune formation along a larger stretch of coastline over a period of one or more decades, thus contributing to the preservation and increase of safety against flooding over a longer period.

The coast of Delfland, defined as a coastal stretch of about 14 km between Hook of Holland and The Hague (Netherlands), is characterised by dunes and a net northward transport of sand, driven by predominantly southwestern winds. To maintain this part of the coast regular nourishments have been carried out of about 1 million m³ per year on average. As an alternative nourishment method, now the Sand Engine has been placed based on principle of spatially concentrated nourishment for coastal development. It concerns a pilot experiment which will be extensively monitored and investigated.

In winter 2010 a beach nourishment was conducted between the port of Scheveningen and the jetty (pier). A volume of 1.5 Mm³ of sand was placed on the beach. The sand was borrowed beyond the 20 m depth contour line at a distance of about 15km. The sand was pumped through a floating pipeline of 2 km long and disposed near the beach. The nourishment resulted in a shift of the shoreline of 40 – 70 m as the area close to the port breakwater was not nourished. This ‘jump’ in the shoreline caused the waves from the northwest to nicely refract and create great surfing conditions.

In October and November of the year 2009, a pilot project was executed at the coast of Ter Heijde, a small village along the Holland Coast. The project comprises the construction of three so called sand groynes. Sand groynes are concentrated nourishments, constructed from the shoreline in seaward direction appearing in the form of small peninsulas. The groynes contain about 200.000 m³ of sand and serve as an input of sand in the coastal system. The sand in the groynes is anticipated to be uniformly redistributed over a stretch of coast of about 2.5km by the impact of waves and currents. The pilot project was executed as a part of the reinforcement program of the Delfland Coast as one of the Zwakke Schakels (in English: Weak Links) along the Dutch coast.

Sylt (Germany) is a sandy barrier island in the North Sea. It is the most northern of the German Wadden Sea islands. The coastal zone is characterised by sand dunes, by sand dune cliffs at the west coast (up to 35 m high, flattening towards the south) and by sand beaches in front of the cliffs, that break some of the oncoming wave energy. Nonetheless, the 40 km west coast is very vulnerable to erosion.

Sand nourishment started in 1972 and has been repeated at irregular or regular intervals. Hard structure protection of the west coast has been found ineffective in the long run. Even some negative effects have been noticed. Partly because of the hard measures taken, the central part of Sylt is reasonably stable. However, the hard measures on the long run will fail. Nourishments are now needed to protect these hard coastal constructions. Furthermore, the nourishments are effective in stopping the coastline from receding. At Westerland, the nourishments have to be repeated every six years. See the EUROSION report for more details.

Along the Frisian coast of the IJsselmeer a need for strengthening of lake dikes in the light of rising sea levels and the need of adapting lake water levels became apparent. It was decided to explore the application of small sand engines at two locations (see Sand Engines IJsselmeer). The general goal of the two experiments is to gain expertise in creating semi-natural floodplains along shallow lake shores and to fill knowledge gaps concerning sediment dynamics and the role of bio-engineers in an environment without tides. Moreover, as the area has a complex ownership and is intensively used, good lessons are learned on governance of this type of shore protection and on recreational embedding.

Despite the similarity the two Sand Engines are each focusing on different spatial functions The Workumerwaard, aimed at revitalizing a nature area by inducing new sedimentation. The second, at Oudemirdumerklif, concerns an experimental shallow foreshore to absorb wave energy as alternative to dike reinforcement. The first pilot, at Workumerwaard is in place now and monitoring of ecological and morphological effects is taking place. For more details and figures, see Sand Engine Workumerwaard.

The Bornrif is an attached bar at the northwestern edge of the Wadden Sea barrier island, Ameland. Ameland is located in the northern part of Netherlands and together with another Wadden island, Terschelling, it forms the Amelander inlet. The Bornrif is a dynamic feature influenced by the Ameland estuary dynamics, tides and wave driven currents; however, other aspects as wind, vegetation and bioturbation also play an important role in its development.