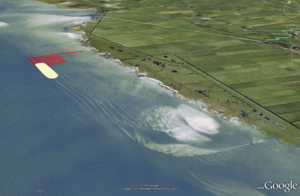 Natural or semi-natural wetlands in front of existing lake dikes may help dissipate wave energy, thus reducing the probability of wave-induced over topping. Moreover, such wetlands are valuable nature areas and popular places for recreation. In order to maintain and revitalize such a wetland, a concentrated shore face nourishment (‘soft sand engine’) is placed roughly 500 m offshore of the Workumerwaard. The design utilities the wave-induced sediment transport to gradually bring the sediment onshore. Furthermore bio-engineers are stimulated to grow on the new sediments, thus preventing erosion. 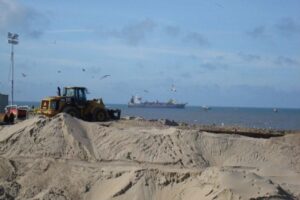 To reduce the storm-related risk of flooding in Delta Lakes and Reservoirs, traditional and proven technology is to strengthen existing dikes. This usually involves raising as well as broadening the dike, which can have a profound impact on the landscape, nature and cultural values in the vicinity. Despite the fact that dike strengthening enhances the safety level of a given area, its impacts on landscape and user functions can trigger adverse reactions from local stakeholders.

A concentrated shore face nourishment (‘soft sand engine’) is used to maintain and revitalize a natural wetland in front of the main flood defense to maintain or enhance flood safety in the hinterland, to create new habitat and to provide opportunities for nature. Of the three soft sand engines planned in Lake IJsselmeer, the one near the Workumerwaard is the only one that is fully functional and is currently being monitored and evaluated

June 2011 marked the beginning of the construction of the first soft sand engine in Lake IJsselmeer, These sand engines are meant to enable the coast to adjust to a gradually rising water level and stronger water level variations. The implementation is governed by a coalition of regional and national actors, led by It Fryske Gea (Association of nature conservation in Friesland, The Netherlands). The objective of the experiment is to test the functioning and effectiveness of such concentrated shore nourishment in combination with bio-engineers.

The need for soft sand engines

To better cope with the rising sea levels and maintain fresh water security during periods of droughts, the committee Veerman suggested to gradually increase the water table of Lake IJsselmeer with up to 1.5 meter (Deltacommissie 2008). This will not only have severe consequences for important functions in the region, like nature areas and recreation, but puts additional pressure on existing engineering structures designed to maintain water safety. In 2009 the Building with Nature programme was asked to initiate a pilot study along the Frisian coast of the IJsselmeer to renew the landscape, improve existing – and develop new – nature areas, providing new opportunity for recreation whilst at the same time improving water safety. With these objectives in mind, the idea of creating soft sand engines was born. By creating sand banks at strategic locations in combination with pole screens sedimentation of foreshores can be stimulated. Of the three pilot projects planned, the sand engine in front of the Workumerwaard is the only one that has been constructed, is fully functional and is being monitored and evaluated. For an overview of the other pilot projects, see the Sand Engines – Friese IJsselmeer coast.

The Workumerwaard is a nature reserve in front of the dike near the village of Workum. It consists of former tidal flats and salt marshes that have been vegetated after the closure of the Zuiderzee by the Afsluitdijk in 1932 and the subsequent desalination of the lake. On maps from 1850, the area is clearly recognizable as a tidal flat, with a salt marsh in the most landward area. Presently, the area consists of agricultural land that extends about 1.5 m from the dike. This land is bounded by a low levee, which separates it from a wetland nature reserve area of about 300 m wide. The shore consists of a pronounced sandy beach ridge of up to 1.2 meter height and up to 30 meters wide. Such a beach ridge is typical of an erosive coast (Reading and Collinson, 1996). At the lake side of this beach ridge there is a shallow submerged platform of about 800 m wide, on which a series of shore-parallel sandbars have developed. The depth of this area is up to NAP -1.2 m (NAP = chart datum). At the offshore edge of the platform, a steep slope leads to the bottom of the lake, at about NAP – 3.5 m. (Wiersma et al., 2016).

The important role of foreshores

Just a dike with the only function to be a barrier to high water might not be the optimal solution in terms of space usage and costs. By integrating natural processes and ecosystems in a flood defense scheme, a multitude of goals can be served (Tromp and Wesenbeeck, 2011). Shallow foreshores can play an important role in this approach:

Water safety, nature quality and recreational opportunities can all be served by creating or improving shallow foreshores. Constructing soft sand engines is a new and innovative Building with Nature approach to maintain or extend such foreshores. Rather than direct engineering of the foreshores in front of the dikes of lake IJsselmeer, the basic idea is to let nature take its course. If a ridge of sand is deposited on the edge of the shore face platform, waves and currents will slowly transport the sand onshore, where it can settle. In order to stimulate this settling at the right place, strategically placed pole screens can be used. Thus the coast is enabled to build out in a natural way and adapt itself to the prevailing hydrodynamic conditions, even if these are changing gradually (It Fryske Gea 2011, Van Slobbe et al. 2012).