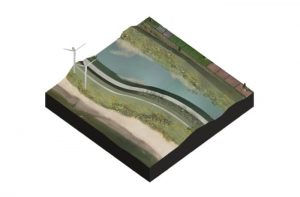 The principle of a double-levee system is already being practiced at several locations.

The establishment of the Coastal Laboratory (“Kustlaboratorium” in Dutch) is an initiative of the Zeeuwse Landschap foundation in cooperation with several other parties. The goal is to investigate potential synergy between coastal safety, aquaculture innovation, nature and recreation (www.kustlaboratorium.nl). The development site is part of the Waterdunen, an area of 30 ha located near Breskens, Zeeuws Vlaanderen.

ComCoast is a four-year collaboration of North Sea countries Belgium, Denmark, Germany, Netherlands and United Kingdom, that ran from 2004 – 2007. The program develops and demonstrates new ways of management and organization of the coastal zone by means of pilots. The core of this program is to apply a zonation in flood risk by allowing dike overflow during extreme high water conditions and to build a secondary defense. Besides the program also aims to investigate social value of these areas. An example is the project Ellewoutsdijk where two parallel dikes were strengthened and together form a flood protection zone.