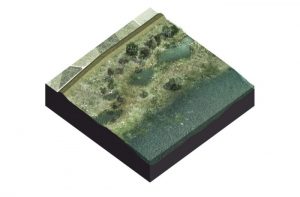 Foreshores in freshwater environments can consist of freshwater wetlands or floodplains. A shallow foreshore or floodplain can contribute in different ways to the strength, the stability and the flood protection capacity of a dike. The foreshore can reinforce the macro stability of the dike and can strengthen the dike by increasing the seepage length. Under certain conditions the dike’s crest can even be designed lower than in a traditional design due to the wave-attenuating effect of the foreshore. This may be enhanced by introducing vegetation such as reeds, shrubs or trees. In the absence of a natural foreshore, a gradually sloping foreshore can be constructed in front of the dike.

Main characteristics of this foreshore dike are the gradual slope, in comparison with the steep slopes of traditional dikes, and the different vegetation zones on this slope that play a role in reducing flood risk. The habitats that can develop on the slope of this dike provide services to the adjacent ecosystem and opportunities for recreation and landscaping. If the adjacent water contains enough sediment to be trapped by the vegetation, the combination of sediment trapping and vegetation-induced soil formation enables the foreshore to adapt to a slowly increasing water level (relative sea level rise).

Dikes bordering freshwater systems such as rivers or lakes are usually built as relatively steep structures consisting of a sand core with a clay cover and a grass mat on top of it. Synergy of these dikes with the surrounding landscape is generally not included in the design. Depending on the situation, the area around the water line is protected by a revetment of rock or concrete elements, or by a vegetation zone, often a band of reed. These levees are designed to withstand design water levels and overtopping of locally generated wind waves. Especially the overtopping restriction can lead to a significant extra design height and the need to stabilize the inner slope (usually with a berm). Adding a berm often requires considerable space and consequently leads to substantial additional costs.

Some older levees still have a core of material that was locally available by the time, such as peat or seaweed. Apart from this, many older dikes don’t meet present-day stability requirements, because they have been built too steep. Also, dikes in areas with a sandy subsoil may be susceptible to piping (the formation of sediment transporting seepage channels), which can undermine the dike (for instance see IVW 2011). In order to maintain the prevailing flood safety level, dikes which are not up to the prevailing quality standards have to be re-engineered, or other measures need to be taken. If there is enough space available at the water side, constructing or preserving a shallow foreshore may be an option to increase safety, provided that these foreshores are included in the safety assessment procedure (which is not the case in the Netherlands, so far, also see V&W 2007).

In summary, shallow foreshores may help solving the above problems without socially and environmentally intrusive dike strengthening via:

Additionally, foreshores, whether naturally present or constructed as part of a levee system, generate other functions and services, such as recreation, natural value and carbon sequestration. Furthermore, they form a stepping stone or a corridor that connects existing ecosystems. Other ecosystem services they can potentially provide are water quality improvement and resting, foraging and breeding grounds for migratory and residential birds. Sometimes this type of composite flood defence system can be built entirely without hard elements. In other cases limited use of hard elements, e.g. around the waterline, may be necessary. Also, nourishment schemes can be considered for maintenance.

Lakeside foreshores can be constructed from the water side, using well-known dredging and deposition techniques. This reduces the disturbance of local communities behind the dike (inconvenience, noise, sometimes also removal of property and houses), as well as the potential damage to roads and buildings due to heavy traffic. From a life-cycle point of view, the cost can be less than those of repeated dike strengthening, especially if the foreshore is able to form enough new soil and trap enough sediment.

A point of attention concerning soft-sediment foreshores, especially in wave-exposed areas, is that they will have a more dynamic interaction with the principal forcing factors (wind, waves and currents) than a dike covered with a healthy grass mat or stone revetments. This can be dealt with by including a zone in which natural processes, such as erosion and sedimentation can take place. In that case, a setback line behind which no erosion is allowed needs to be defined (similar to the case of dune erosion on the coast). If erosion proceeds until or beyond this line, maintenance and adaptation measures are necessary, but these will be relatively cheap as they will mainly boil down to earthwork.

Moreover, the foreshore vegetation is a live element in the system, which means that it will go through a number of succession stages and will vary through the seasons in biomass and flow resistance properties, hence in effectiveness to flood protection. Also, the possibility of degradation due to pests and diseases has to be taken into account (like with grass-covered dikes). Regular monitoring, assessment and maintenance are required to make sure that the system is in place when needed. Finally, there may be legal aspects, as the existing foreshore may be protected habitat (e.g. under Natura2000) or may come under a different jurisdiction than the levee.