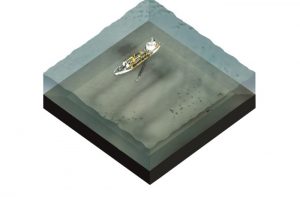 Determine a basic design for a landscaped ecological mining pit

The results presented in a report (Tonnon, 2013) and study (De Jong et al. 2015b) support the hypothesis that ecosystem-based landscaping increases biodiversity in the sand extraction site. Moreover, based on the bed shear stress, a distinction could be made between two clusters (the Albra alba assemblage and the Echinoidea spp. – phoronidea assamblage). The Albra assemblage was roughly found in areas having a bed shear stress smaller than 0.4 N m-2 and the Echinoidea spp. – phoronidea assemblage was roughly found at bed shear stresses larger than 0.4 N m-2.

The ecological effects of the different extraction depths and ecological landscaping in view of the criteria of the MSFD descriptors for the Dutch coastal area with 20 m pre-extraction water depth and a flow velocity of 0.65 m s-1. Green: positive effects, yellow: minor effects, red: negative aspects and brown intermediate effects (positive and negative)

Back to How to Use – Ecological Landscaping of Seabed