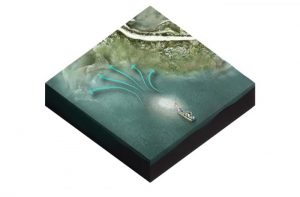 The strategic placement of dredged sediment in shallow tidal environments can take advantage of the transport capacity of currents and waves to transport and disperse the material naturally to a desired location. Strategic placement of mud can enhance ecological habitats. It can also decrease turbidity and reduce the need to ship this material over a large distance. This maximises ecological benefits and minimises costs. Throughout the world, there are locations that have an excess or shortage of fine sediment. For example, sediment is needed to raise the land to keep up with sea level rise. Strategically disposing mud can help mud flats and salt marshes to grow with sea-level rise. Thereby, it can help preserving or preparing certain ecosystems for the future.

The incentive to strategically place mud usually comes from an excessive deposition problem in a port, river or lake. This material can be re-used and help to solve other problems. With strategically disposing mud, we transform sediment from waste into a resource and contribute to the circular economy. Tidal flows will move the sediment in the water column onto and in front of the salt marshes. The mudflats and salt marshes are flooded at high tide. The sediment can then settle to the bed, because flow conditions are typically calmer. Adequate sediment flows allow mudflats and salt marshes to grow with sea level rise. To do so, the sediment needs to be retained.

Source: Sediment origin and deposition within the tidal system

At certain locations, excessive accumulation of sediment occurs. Within shallow, tidally influenced systems, fine sediment typically settles in ports or other areas that are sheltered from currents and waves. The background and type of material that you will find will depend on riverine/marine origin of the sediment. The origin of the sediment can reveal more characteristics of the material.

Tidal currents move the sediments back and forth during ebb and flood. The difference in hydrodynamic conditions between ebb and flood determine the net-residual current and net sediment transport directions. Tidal asymmetry can favour transport in one direction over the other. This determines where the material will end up. In addition to that, wind effects are important, because wind induced waves can create a net sediment transport gradient. Possibly stratification effects may affect sediment transport (in the case of estuaries). All those residual current patterns determine where the material will end, such as mudflats and salt marshes.

For example, when dredged material is spread in a tidal channel, it will be transported by flood flow towards the coast. The tidal flow and sometimes also wind-induced waves transport the material naturally to the salt marsh and the mudflats in front of it. Fine sediment is mostly transported in suspension. In general, fine sediment is much more likely to be limited by supply (i.e. available sediment) rather than the capacity to transport the sediment. In contrast, transport of coarser sediment is more often limited by the transport capacity. Therefore, tidal systems often have a larger capacity to transport fine sediments than sands. This might imply that a different modelling approach is needed opposed to the ones used for modelling sand or coarse material.

Water levels and tidal currents are often seen as perfectly sinusoidally over an ebb and flood cycle, e.g. with equal durations for ebb and flood and with equal peak velocities. However, various factors cause deviations in the tidal signal, such as deformation of the tide on the shelf and in the tidal basin due to interaction with the bed (friction), but also the distribution of bed levels within the tidal basin. Systems with a large percentage of intertidal area typically become ebb dominant (i.e. stronger and/or longer ebb flow), while systems with a low percentage are typically flood dominant (i.e. stronger and/or longer flood flow). A deformation of the perfectly sinusoidal tidal signal is called tidal asymmetry. Tidal asymmetry is an important process for this strategy, because tidal asymmetry can cause asymmetry in the sediment transport over a tidal cycle. This can result in net sediment transport in either the landward or seaward direction (see for further information Friedrichs & Aubrey, 1988 or Dalrymple & Choi, 2013).

Fine sediments are predominantly transported in suspension. This makes sedimentation of fine sediments very sensitive to asymmetries in tidal flows. In terms of net sediment movement, this results in a settling lag effect in tidal systems (Van Straaten & Kuenen, 1958; Dalrymple & Choi, 2013). Even though tidal conditions may be symmetrical at a given location, they are asymmetrical through space. Flow velocities are typically lower in landward direction. Assume a mud particle traveling with flood in landward direction: at some point the flow velocity drops below the threshold for continued transport and the particle settles (Point 3 in the figure below). The distance and time it takes for the particle to settle (between 3 and 4 in the figure below) is termed the settling lag. On the following ebb tide, a certain ebb velocity is required to re-entrain the particle. This is described by trajectory E-E’, and the mud particle deposits at 7. This process results in a net landward displacement of the particle (from 1 to 7). Similarly, a scour lag effect can be described, for which the reader is referred to Postma, 1961, Van Straaten & Kuenen, 1958 or Dalrymple & Choi, 2013. The settling lag effect causes a net landward sediment transport.

Under certain favourable conditions, sedimentation on mudflats may favour salt marsh formation.  Settlement of vegetation slows down the flow of water, which in turn allows sediment to settle. This is a positive feedback loop that helps the development of nature along the coast. Fine sediment is important for the ecological functioning of tidal flats and is ecologically (e.g. as foraging area for migratory birds), as well as economically (e.g. mussel beds and oyster reefs) beneficial.

Strategically disposing sediment has many benefits, which may include: