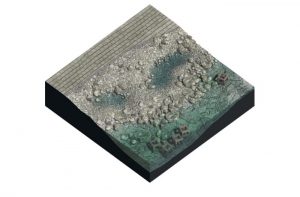 A number of different field cases are presented on the right side, providing applications of the concept of Rich Revetment. Design or application can greatly differ among sites, depending on goals (coastal protection, nature development, retention) and specific local conditions. For example, depth and wave exposure determine what design is best applicable. Rich revetment structures are typically applied in shallow environments with limited wave exposure. Experiences from specific cases can be used as inspiration for future designs. For more information on the Building with Nature cases we refer to the case description pages.

The pilot project in Yerseke is the first location in the Netherlands that uses tidal pools, called ecobasins, in the “toe” of the dike. The “toe” is the fortified link between the slope and the front shore. The dike toe consists of stones, protecting the dike against erosion and to support the dike cover. As a pilot, ecobasins are designed on a dike section of 1 km. 10 short pools (basin type 1) and 2 long pools (basin type 2) are installed on this dike section. The basins are waterproof and water remains in the ecobasins during low-tide.

Within the basins various stone types and sortings provide fixation for algae and shelter for juvenile fish and macrofauna. The basins at the toe of the dike are sealed with sheet asphalt and then filled up with lava stone. The dike toe is located near the low tide line, so that water remains in the basins after high tide. In all basins the total number of species have increased. Basins that fall dry contain less species than basins in which water remains during low tide. 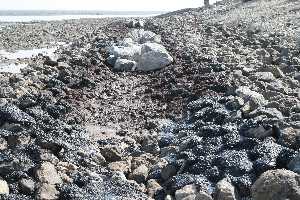 For several locations along the Eastern and Western Scheldt the dike foreshore needed to be strengthened in 2009. The requirements for this contract to ensure the dike stability was originally focussed on economical aspects only. However, the special ecological value of two locations in the Eastern Scheldt were recognized.

The approach to enriching the foreshore involved creating as many different habitats as possible. The engineering design called for a variety of different materials, gradients and shapes. The design aims to create differences in height, hiding places, and variations in the exposure to and shelter from the currents. To ensure flexibility, the design consists of a modular system of blocks consisting of round, cris-crossed and atoll-shaped piles of stones and linear elements, all in varying sizes. Combining these blocks made it possible to achieve more variety at a larger scale.
The development of the underwater landscape is monitored by divers. A fast recovery was stated as well as a high biodiversity. Also rare organisms settle within the landscape. The site has developed as a popular diving spot, this enlarges the supportive group for these types of alternatives.

The breakwaters of the entrance of the North Sea Channel at IJmuiden (The Netherlands) protect the port against wave attack. The breakwaters consist of concrete blocks. The surface of the blocks, the cracks, and spaces between these blocks are habitats for a diversity of marine flora and fauna like algae, insects, crabs and shellfish, fish and birds (including a red list species). Because of this, it is important that during and after renovation of breakwaters, the affected hard substrate habitats will recover quickly.

In order to stimulate the growth of marine species on the breakwaters, the aim of this pilot study was to test slabs with various textures and geometric shapes attached to the concrete blocks for algal and macro-faunal colonisation (see picture).

In conclusion, small adaptations of both texture and structure of concrete constructions within the intertidal zone of the marine environment lead to better settlement and growth conditions for algae and macrobenthos to settle and grow. Thus primary and secondary production is enhanced, without decreasing the safety level of the port.

The seawall of the village of Ellewoutsdijk was in need of repairs. However, raising the dikes is not a viable option as that would mean doing away with an ancient fort. Innovative solutions are required in order to preserve safety (ComCoast). It was investigated whether it would be possible to reinforce the dike coverings instead of raising them. That way, in extreme situations the highest waves could crash over the seaside dike without the inward dikes failing as a result. A water retaining top layer has been added to of the armour layer. Additionally, a small (coffee cup size) hole has been made in some stones. At low tide, small puddles remain in these holes, further stimulating algae growth.

Increasing urbanisation worldwide has resulted in extensive replacement of natural habitats with man-made habitats (Chapman et al., 2009). A good example is the artificial seawall, that has becomes an ubiquitous feature of the coastline with the increased need for protection (Moschella et al., 2005). This has resulted in habitat fragmentation and a global loss of various coastal ecosystems that occur at the transition from sea to land (Chapman et al., 2003).

The physical conditions along the gradient from lower to the upper shore are extremely variable. The subtidal is essentially fully marine and not exposed to the same stressors as the intertital The intertidal is a much more stressful environment for marine organisms, primarily due to the time spent ‘emersed’, i.e. exposed to the air. On seawalls the high littoral zone tends to host very low in diversity as the conditions are too harsh to support marine life. Natural rocky shores tend to have more refugia and can therefore support more life at the higher zones.

To aim for a greater biodiversity, concrete (complexity) tiles are retrofitted to existing seawalls. There is a five-step design plan:

Retrofitting of tiles has a strong positive effect on the seawall diversity. This result offers promising opportunities to incorporate the best-tile designs within concrete blocks as typically used for seawall construction.