This tool is easy to use for rapid assessments of the expected direct environmental effects of dredging operations. The user interface is easy to use and enables defining and evaluating different dredging scenarios. Clearly, the proper interpretation of results requires a certain level of knowledge on dredging operations, ecology and the models and databases underlying the tool. This sections provides more details on the following:

The IDPT is available as a stand-alone tool locally installed on the user’s PC to be used for the planning of dredging operations. Installation of Python, Pylons, the Matlab wrapper and Matlab is required.

The working principles of the IDPT can be described with the steps of the workflow. The technical workflow diagram in the figure below shows the relations between the different modules. 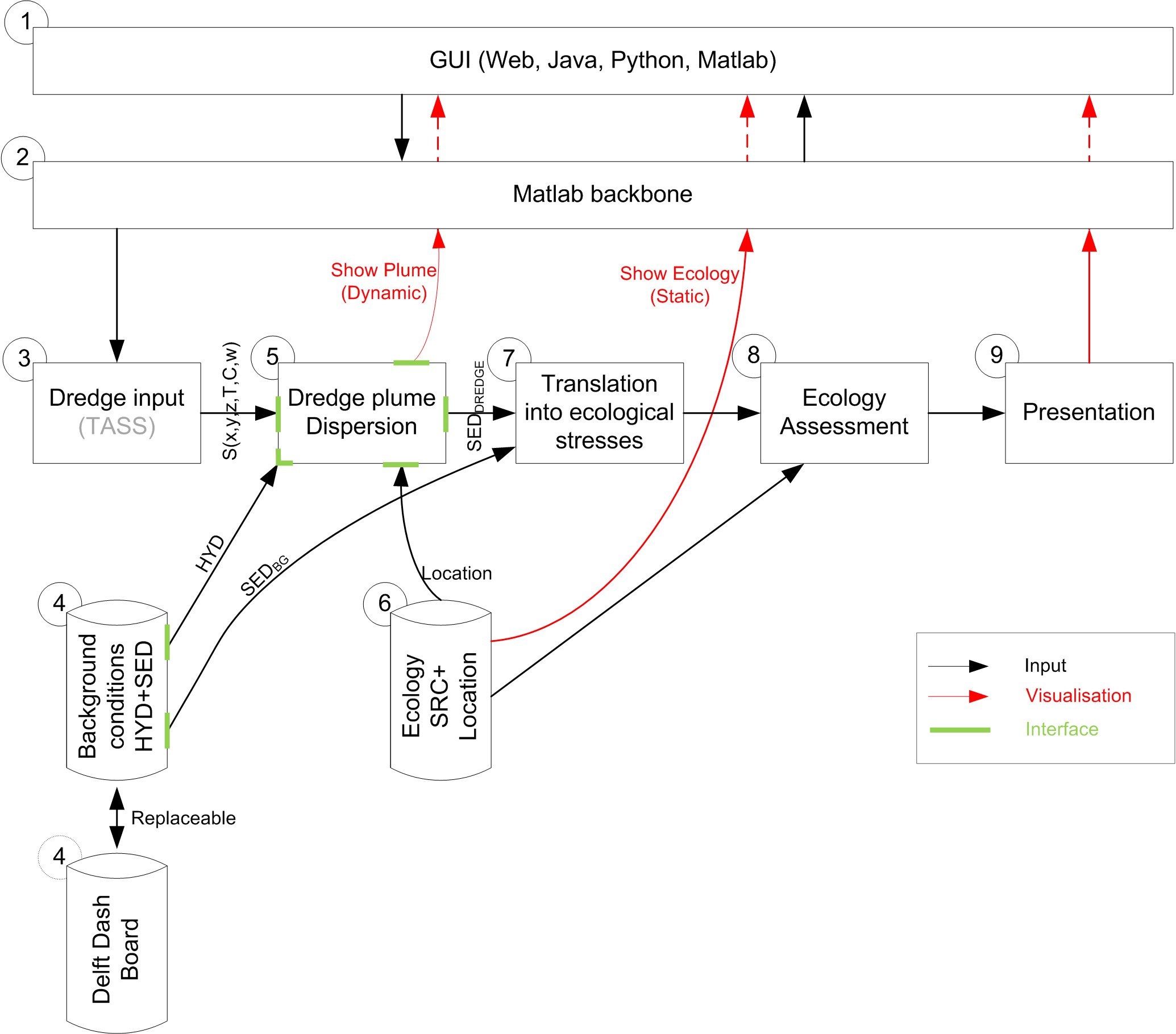 Note that different types of ecological criteria can be part of the IDPT, such as the mentioned SRCs. Also other ecological can be used, or non-ecological ones such as criteria related to territorial waters between countries. Criteria can simply be added to the database and assessment modules described above.

3. Functioning of the IDPT prototype version

This section describes how in general the user can work with the tool.

4. Developing a case with the IDPT

The set-up of the IDPT is generic, such that this software can be used for any site or location. In the current research program of Building with Nature the tool has been applied to the Singapore coastal waters. Application at another location requires site-specific data, like:

The IDPT-code is easily adaptable by experienced Matlab users, because of its modular set-up. If desired, modules can be replaced or added to the workflow and the behaviour and appearance of the tool can be changed. This flexibility is used, for instance, when making dredging suitability maps (based on a maximum specified effect) instead of assessing the effects of a specific dredging operation

The IDPT is intended for rapid assessment of the effects of dredging activities on vulnerable coastal ecosystems. The first-order estimate of ecological effects it produces cannot replace more advanced analyses or detailed modelling. The usefulness of the results depends, among others, on the accuracy of the ecological database, the hydrodynamic and sediment background conditions and the dredge plume dispersion model. This means that the computed ecological effects need to be considered carefully, taking into account the possible uncertainty ranges associated with the complex nature of the chain of operations leading to the estimated ecological effects. Expert interpretation and explanation are essential for proper use.

These lessons are derived from a workshop session on 22 December 2011 involving Ecoshape Partners. The overview has been updated on 1 March 2012 and 21 June 2012.