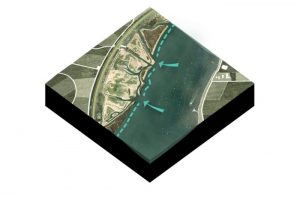 Two other related applications are described in separate Concepts:

Banked realignment concerns complete dike removal. With this measure a fully open connection with the estuarine or marine environment is restored. It is also helpful in creating more water storage capacity, for example in narrow river mouths. However this design is not often used because of the high costs involved in dike removal. Also lack of shelter can cause erosion that prevents salt marsh development and a higher wave attack on the new inland dike. The Welwick site along the Humber Estuary in North England is one of the few examples where complete dike removal took place (Pontee, 2007) and 1400 m dike was removed. This was done to enhance and maintain mudflat formation which was the main goal. Banked realignment enables higher water movement levels within the site with the absence of the formal sea defence, thereby improving the probability that mudflat habitat will be maintained (Institute of Estuarine & Coastal Studies, 2008).

With this method the coastal defence is maintained and foreseen with one or more inlets depending on the size and shape of the area. This method concerns less excavation then banked realignment and provides more shelter to the re-inundated area which limits erosion and impact on the secondary dike by reducing wave energy. In the Humber estuary coastal management applies breached realignment at several sites to enhance coastal protection and mitigate for coastal squeeze. The interaction with the estuarine ecosystem, however, is more limited. The inlet design is determining water flow and volumes. The width of the inlet should at least be broader than the width of the main ebb tidal gullies in the area. Previous experience showed that if inlets are too narrow, high flow velocities occur which can damage the breached dike (Dixon et al., 2008). A study by Townsend (2008) describes a method for inlet design that is based on the maximum allowed flow velocity before erosion occurs, the elevation of the area in regard to sea level and current conditions. Also the orientation of the inlet can influence the tidal energy and flow velocities coming into the area (Van Oevelen et al., 2000). Examples of breached realignment are given in Case – Wetland Restoration Wallasea and in Case – Perkpolder.

Use of a culvert/sluice system in the coastal defence enables regulated tidal exchange to the re-inundated area. A high level and low level sluice in the dike enable inflow during high tide and discharge during low tide. The position of the sluices in the dike determines the tidal regime in the area. In a river mouth where fresh as well as salt water influence is present the sluice positioning and design can also determine water quality (salinity and nutrient) inflow (Maris et al., 2007) and determines the amount of water and sediment inflow. Regulated tidal exchange is mainly used for water retention motives, for example along the freshwater tidal zone of the Scheldt estuary (Belgium), where more retention is created by allowing reduced tide and dike overflow at several sites along the estuary. The potential of these sites concerning sedimentation and the ability of the area to grow with sea level rise also looks promising. By limiting currents and wave action, limited erosion occurs (Peeters et al., 2009). Because water depth is not determined by the natural feedback (increase of elevation means decrease in water depth when inundating) but remains constant, continuous high sedimentation rates are possible (Vandenbruwaene et al., 2011). Vandenbruwaene et al. (2011) calculated that an area with regulated tidal exchange could grow up to 2-2,5 times faster than a natural salt marsh over 75 years. Drawbacks are high construction costs due to the sluices and limited exchange with the estuarine ecosystem.