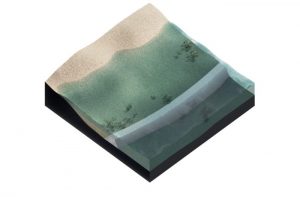 Here, we present a couple of case studies from the USA, Italy and Australia where perched beaches have been applied for sustainable coastal management.

South of Rome at the Italian coast, an eroding beach was nourished in combination with the construction of a submerged breakwater. Erosion occurred due to decreased sediment supply from a river nearby. The tidal range is limited in the Mediterranean Sea (less than 0.5 m) and waves can exceed a significant wave height of 5 m with a period of 10 seconds, arriving at the coastline under an angle of 15 degrees to the shore normal.

The perched beach developments were hindcasted with a model based on the Unibest software package, which predicted the coastal evolution quite well, except near the water line, where the erosion was underestimated. The sill is located at 150 m from the shoreline at a depth of 4-5 m. The crest of the sill has a width of 15 m and is elevated till 1.5 m – MSL. The total length of the sill is 3 km. No cross-shore groins were constructed. After 3 years, the behaviour of the perched beach was satisfactory. Minor sand losses had occurred behind and downdrift of the breakwater. The rubblemound breakwater was fully covered with mussels, which is a bonus for marine fauna and leisure fishing (Lamberti et al. 2005, Ferrante et al. 1992). According to Gonzalez et al (1999), the difference in success for the Florida and Lido di Ostia projects can be explained by the coarser material used for the nourishment in Italy.

In 1995, a system of partially submerged groins and a long submerged breakwater was constructed at Pellestrina beach. Pellestrina beach is located at the seaward side of one of the barrier islands of the Venice Lagoon in Italy. The structures form a system of 18 partially closed cells. The spring tidal range amounts 1m and the 1/10 year wave height is 3.7m. In addition, seasonal winds (Bora) can result in significant wind set-up. The groins are about 150-210 m long with the crest at about +2.2 to 2.7m above the MWL and for their first 100 m they are on the beach. These groins are joined to the submerged breakwater through a submerged part with the crest at about 1.5m below the MWL. The system is is able to solve erosion problems (Lamberti et al. 2005). 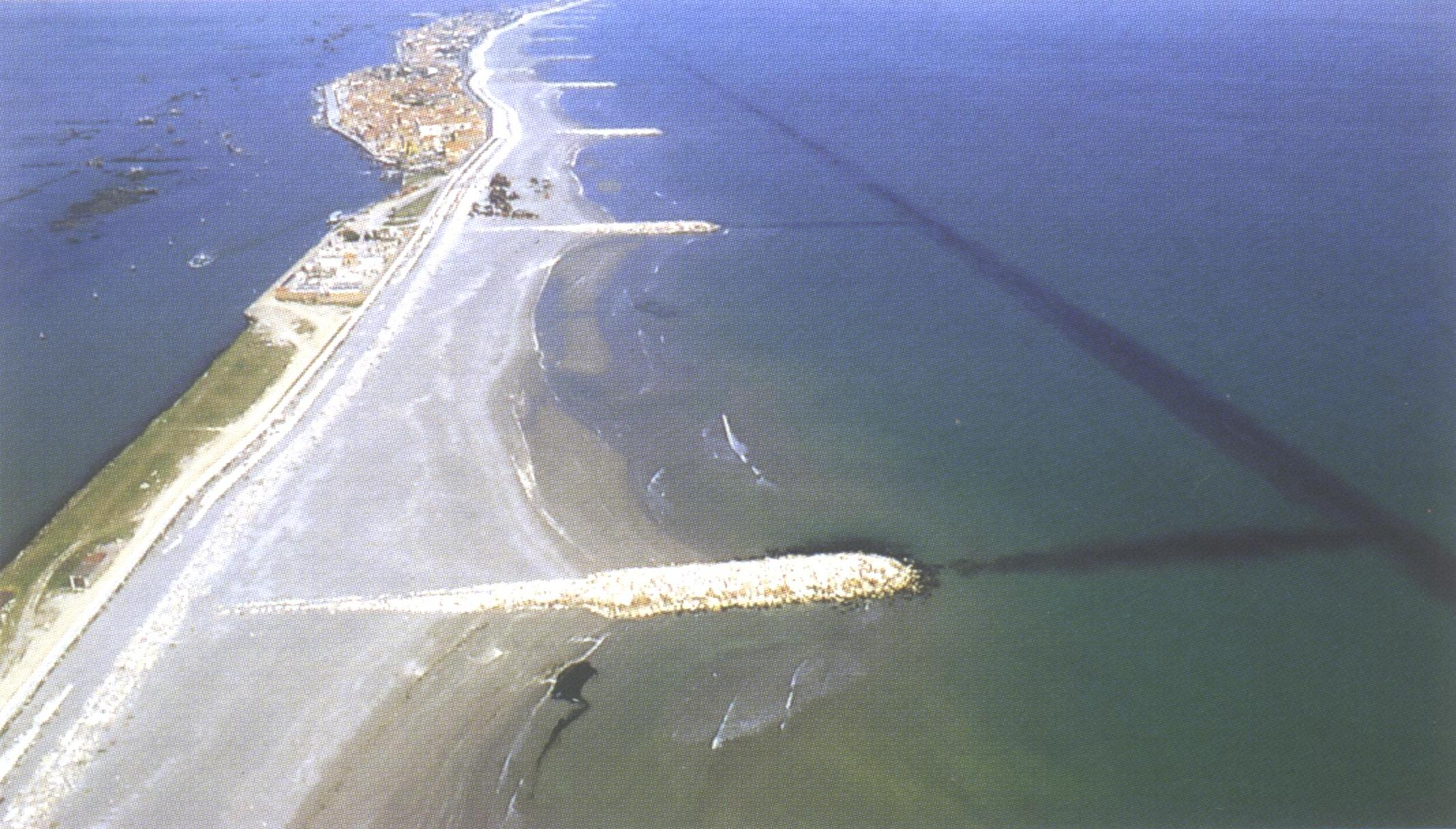 At the Gold coast in Australia an artificial reef is constructed with large filled sandbags (up to 350 ton). The aim of the artificial reef is to provide beach protection and to enhance surf conditions. For this reason, the structure is V-shaped. The design is created to have two twin reefs with a stream for peddling in between. The structure extends from 100 m to 600 m offshore and over 350 m alongshore. The bed slope is approximately 1:50. The crest was initially located 1 m below MLW. A large nourishment was applied at the beach during the construction phase. Initially substantial erosion occurred (up to 2 m), which resulted in significant lowering of the structure’s crest. The crest was heightened to the initial level afterwards. At the beach a salient formed in the lee of the structure, resulting in an accretion of approximately 10-20 m in two years (Ranasinghe and Turner, 2006). For more information, visit the knowledge page on artificial reefs.

Shellfish such as oysters and mussels are reef-forming ecosystem engineers. Their reefs can protect shorelines and stabilize eroding (intertidal) areas. Apart from locally fixing sediment, they are able to influence tidal flow and wave action at larger scales, causing changes in depositional patterns. Oyster reefs are applied in many places around the world as a coastal protection method (e.g. living shorelines), reducing hydraulic forces and enhancing sediment entrapment. In this project we constructed artificial reefs in the Oosterschelde (SW Netherlands) to reduce the erosion of tidal flats. To be successful, the artificially placed substrate needs to develop into a living, persistent oyster reef and at the same time protect the tidal flat against erosion. Read more about the project here.